Why your 2 year-old’s nightwakings aren’t going away! 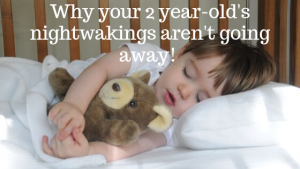 Anyone here wondering why their 2 year-old’s nightwakings are still happening?  You’re not alone!  A mom in the My Sleeping Baby Facebook community has a toddler who continues to wake up at night for a bottle.

Jennifer posted the following question: “Does anyone here have a two year old who keeps waking up at night? My son wakes up every night at different times screaming, nothing seems to calm him down. It’s so hard to get him to go back to sleep. He’ll ask for milk usually too. I don’t know what to do. Will this ever end?”

Will this ever end?

Absolutely. By the time he’s 16, he’s likely not going to be waking you up at night asking for a bottle of milk!  The better question to be asking is whether this going to end anytime soon.  The truthful answer is that we don’t know.  If we don’t jump in and intervene, there’s no guarantee as to how much longer this nighttime behaviour could go on for.

The better question to be asking is whether this fixable. Does your 2 year-old need to be waking up repeatedly at night for a bottle? And is this good for him?  No, your two year old CAN absolutely be sleeping through the night on a regular basis.   And no, it’s NOT in anyone’s best interests, including a toddler’s to be waking up at night because we need sleep!

How we fall asleep initially is what sets the tone for the rest of the night. If your little one relies on certain conditions, such as a bottle to fall asleep, this could explain why he’s waking up wanting a bottle to go BACK to sleep.  When he wakes up at the end of one of his many sleep cycles, he might expect you to recreate those conditions of which he relied on to fall asleep to begin with.

The solution?  Teach him how to fall asleep by himself, without the bottle.  Toddler sleep training is very doable with the right plan in place.  My favourite sleep training method for toddlers is the Sleep Lady Shuffle.  NO cry-it-out is necessary here!

Jennifer mentioned that when he wakes up at night, he wants to be taken out of his room.  So let’s be real- that must be fun for him!  He’s obviously figured out that if he wakes up, he’ll get a bottle and some entertainment. The wakeup is worth it to him!

In order for us to fix this, I recommend changing up the way he’s responded to so that the nightwaking is no longer rewarded. This doesn’t mean that you need to resort to “cry it out” either.  The Sleep Lady Shuffle is often a great fit for these situations.  In fact, given his age, it wouldn’t be something I’d recommend anyways. Why take the steep, bumpy road up, if there is a smoother, easier path to get you to the exact same end point?

Will your 2 year-old’s nightwakings ever end?  Yes, but we don’t know when.  As long as we don’t intervene, this problem could continue to go on for longer. If you want to fix this, you can! Make sure that he is falling asleep without assistance initially at bedtime so that you can tuck him in, say goodnight, and leave the room.  And make sure to change how you’re responding to him when he wakes up at night.  He needs to learns how to fall asleep, and back to sleep, without intervention.