Early Rising: Why Your Toddler is Waking Up Too Early 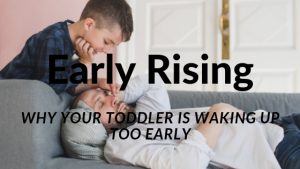 If you’re wondering why your toddler is waking up TOO EARLY on a regular basis, keep reading 🙂  Early rising is the pits!

A mom in the My Sleeping Baby Facebook community has a 3 year-old who was previously a great sleeper.  They transitioned her into a big bed from a crib, which initially went well. They also shortened the length of her nap and eventually removed her nap completely because of her transition to a full time nursery program in September.

Since these transitions took place, her toddler wakes up too early, comes into their bedroom at the crack of dawn, and doesn’t go back to sleep.  How exhausting!

There’s likely one of two culprits causing a toddler to wake up too early.  The problem could be caused by a combination of both factors.

When a toddler finally drops their nap, she can easily become overtired if her bedtime isn’t pushed earlier to compensate for the lack of daytime sleep. Overtiredness, unlike what our common sense dictates, is actually a massive sleep stealer and is a well-known culprit of early rising.  I know it sounds confusing but hear me out: when we become overtired, our bodies become stressed and it causes our cortisol levels to rise.  And when cortisol levels rise, it makes it much harder for us to stay asleep throughout the night.

The solution?  Instead of putting her to bed for 7pm, temporarily push her bedtime back to 6:00 PM. I know this sounds early- and it is. It’s very early!  But sometimes an early bedtime is very necessary when in the thick of dropping a nap. By getting her down an hour earlier for the night, there’s a good chance her night will lengthen.

Culprit #2- Transitioning to a bed too soon

Many 3 year-olds are not ready to be transitioned to a bed just yet.  Many children in this age range sleep better in their cribs because they aren’t mature enough to handle all the freedoms offered by a bed.

Sometimes, a toddler doesn’t realize he can leave his bed and room whenever he pleases at first.  This can mislead parents into thinking the transition to a bed is going well!  And as soon as your toddler realizes she CAN leave, she might go “Hey, wait a second- why would I stay in bed if I can leave my room and drive my parents crazy at 5:00 AM?” This is why many toddlers need a physical boundary to keep them contained, whether it’s a gate by the door or going back into the crib. Otherwise, it could be too tempting for her to leave her room.

For the record, my younger daughter was in a crib until her 4th birthday for this exact reason.  She was very immature and untrustworthy. I knew that if I transitioned her to a bed any earlier, it’s likely not going to end well. Food for thought.

A combination of the two?

The third possibility is your toddler’s early rising problem could be caused by a combination of the two culprits. Your toddler could be overtired AND she might benefit from going back into a crib or having a gate by the door. Play around with both of these possible culprits.  I’d recommend pushing bedtime earlier first. See if this fixes the issue by itself. If your toddler wakes up too early,  you may want to explore the second culprit.